You are here: Home / Blog / Apostolos Giannou recalled to Socceroos for Saudi Arabia and Japan games

Striker Apostolos Giannou has been brought into the Socceroos squad for the 2018 FIFA World Cup Qualifiers against Saudi Arabia (6 October) and Japan on Tuesday 11 October.

The Melbourne-born Giannou will join the likes of Tim Cahill, Tomi Juric, Robbie Kruse and Mathew Leckie in the Caltex Socceroos attack for the two important clashes in Jeddah and then Docklands Stadium in his hometown of Melbourne.

Giannou was happy to be recalled to the squad: “It’s always nice to receive the call up to play for the Socceroos but I was particularly happy after missing out initially. These are two very important games for us after we got off to such a good start and I’m looking forward to getting into camp on Sunday and getting ready for Saudi Arabia and then Japan, which is extra special as it will be played in my hometown Melbourne.”

The Caltex Socceroos start assembling in Jeddah on Sunday evening before facing Saudi Arabia on Thursday evening (6 October) in what is another tough assignment along the road to the 2018 FIFA World Cup, to be played in Russia. 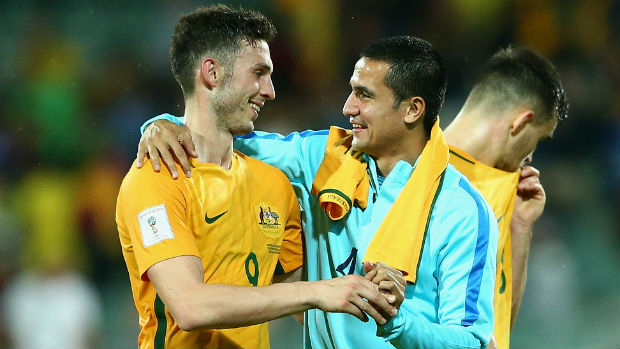 The winner of the top-of-the-table clash will move into pole position in the race to finish as one of the top two teams in Group B and secure automatic qualification for the 2018 FIFA World Cup.

The Caltex Socceroos also take on fellow Asian powerhouse Japan during the October international window, facing off at Docklands Stadium in Melbourne on 11 October.

Giannou replaces Milos Degenek, who has been ruled out after suffering a knee injury while playing for 1860 Munich in Germany.

Australian Head Coach Ange Postecoglou said, “Unfortunately he will miss the matches against Saudi Arabia and Japan but Apo comes into the squad and we know he will be ready to go if required. Apo responded well in the last week and found the back of the net for his club in China so he adds to the forward firepower we have.”

© 2016 Socceroos.com.au | This article first appeared on the Socceroos website on 29 September 2016.