FC Barcelona president Josep Maria Bartomeu has told Harvard Business School students that his club and their big rivals Real Madrid are sacrificing some TV money so that La Liga can be more competitive overall.

For years the two Spanish giants have received the lion’s share of La Liga’s broadcasting revenues. And in this situation, Barca (seven) and Madrid (three) have won 10 of the last 11 First Division titles.

However a new “collectivised” TV deal was mandated into law by the Spanish government earlier this year, and there was serious disagreement during the summer over how it will work in the future. And the situation for the 2015-16 season remains as much as before with Barca and Madrid receiving €140 million each — almost half of the total amount available.

Just a few days after Madrid president Florentino Perez had boasted at the club’s annual general meeting bout how its finances were studied at prestigious U.S institutions including Harvard, his Barca counterpart told students via teleconference that the intention was for the big two to “freeze” the amount they receive and allow other club’s to catch up — to help La Liga compete with the Premier League on a global basis. 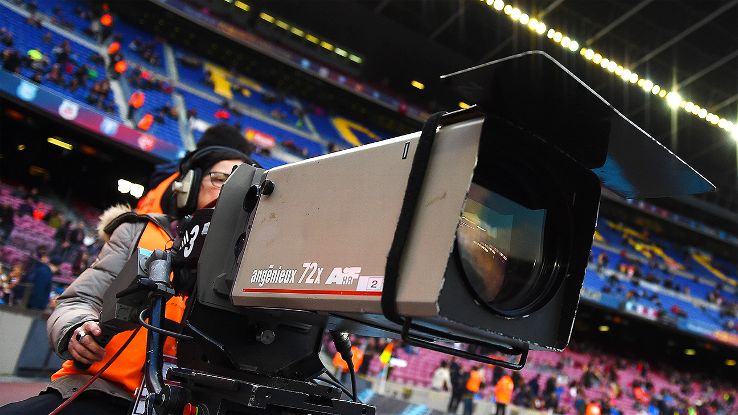 Josep Maria Bartomeu says Barca’s success is centered on how they’ve treated the ball over the years.

“We have frozen the amount we make from television,” Bartomeu said. “It is something that has never happened in the past. The Premier League is very competitive and that’s good for the fans so it’s good for business. In Spain, in the next three or four years we will start to see other clubs getting stronger [because of increased television revenue]. It’s not immediately good for our club but it helps La Liga compete with the Premier League and that will be good for us in the long term.”

An engineer by trade, Bartomeu answered questions on his club’s business philosophy, but did not go into detail about more controversial issues such as their commercial dealings with Qatar, or ongoing legal issues regarding the 2014 signing of Neymar.

“The success of FC Barcelona is centered on, in my opinion, the fact that for four decades we have been trying to treat the ball with the respect that this sport deserves,” Bartomeu said.

“From our youth teams to our great stars — Leo Messi, Neymar and Luis Suarez, Andres Iniesta, Gerard Pique — the ball is the focus of all our efforts. Our way of playing is a reflection of the five basic tenets on which for the essence of our love for football: Effort, Teamwork, Respect, Humility and Ambition.”

“Barcelona’s model proposes that the ball is the essence of the industry, that we have to go back to basics, to the central philosophy of the business in question and once in focus, respect it, love it and develop it,” Bartomeu added. “The ball must be at the centre of our decision making.”

© 2015 ESPN FC | This article was written by Dermot Corrigan and first originally appeared on ESPN FC on 24 September 2015.