In the summer of 2008, Allen Bethel, the chairman of Stocksbridge Park Steels soccer club, was on the hunt for a goal scorer.

His options weren’t great. His team played in a division seven tiers below the English Premier League, where it averages under 500 fans a game. He could offer a salary of only around $160 a week. His pitch to players was simple: “We always pay on time.”

So Bethel took a punt on a scrawny, slightly hot-headed 21-year-old who’d been banging in goals for Stocksbridge’s unpaid reserve team. His name was Jamie Vardy.

It turns out Bethel was on to something. Seven years on, Vardy is the most lethal striker around. Not only is he the Premier League’s unlikely leading scorer with 13 goals, but his hot streak has propelled lowly Leicester City to the top of the standings.

Or maybe not. This season the Foxes have kept passing the ball to Vardy and Vardy has kept on scoring. He’s been on the board in 10 consecutive games. One more on Saturday against Manchester United and he will break a 12-year-old Premier League record held by Dutch scoring legend Ruud van Nistelrooy.

What makes Vardy’s sudden explosion so astonishing is that it defies almost every rule for growing a modern soccer player. His direct style is a throwback. His spindly frame looks ill-suited to an elite athlete. And his breakthrough at age 28 comes at a time when star players are identified in elementary school.

But for reasons that range from his breakneck speed to Leicester’s tactical setup, Vardy has become that rarest of soccer players: an out-of-nowhere star.

“He leads the way for non-league players,” said former Crystal Palace striker Mark Bright, who also started out in the lower reaches of English soccer. 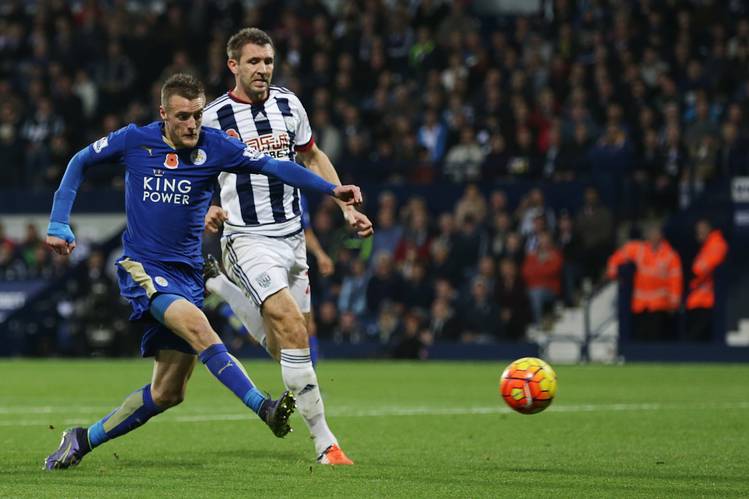 Vardy’s emergence may be almost unfathomable, but it’s not hard to understand what makes him so effective. Vardy has been clocked at 22.02 miles per hour this season, according to data from Opta Sports, making him the Premier League’s fastest player. That pace, combined with his unflagging engine and instinctive finishing, has been his calling card since his days at Stocksbridge.

“There was no great secret to Jamie. He was ridiculously quick,” said Andrew Pilley, who signed him in 2011 for Fleetwood Town, then in the fifth tier. “It was almost like cheating.”

Vardy has burst onto the scene at a time when trends in modern soccer make his pace and direct running even more dangerous. Top clubs have embraced a high-pressing game based on forcing turnovers close to the opposition goal. But a team with the ability to break at lightning speed can cause mayhem by exploiting the holes this leaves in defense.

Leicester has tailored its tactics accordingly. The Foxes knock the ball long and hope that Vardy can use his pace to beat his markers to it. Only two teams have played more long balls than Leicester this season, according to WhoScored.

“I can’t believe what I’ve been seeing on Saturday nights. He’s always on his own,” said Bethel. “Why can’t the Premier League, with all those supposedly good defenders, stop him?”

More than anything, the explanation may lie in Vardy’s meandering route to the top level. Hard-nosed No. 9s like Vardy are a dying breed in European soccer. Arsenal’s longtime manager Arsene Wenger, a specialist of youth development, believes youth academies are geared to produce silky passers. Tough strikers who commit “in the zones where it hurts” and “live on the edge of the rules,” he says, are almost nonexistent in Europe.

“The natural goal scoring ability that Jamie has is coached out of a lot of players,” Pilley said.

Vardy isn’t the first player to blaze a trail from non-league soccer to the top tier. Long before excelling for Arsenal and England, Ian Wright was a late bloomer at Greenwich Borough. Striker Kevin Phillips started out as an undersized defender at semi-professional Baldock Town but went on to record a 30-goal Premier League season. Charlie Austin, who was playing non-league soccer as recently as 2009, had 18 Premier League goals for Queens Park Rangers last year.

But those storybook rises seemed a thing of the past. As clubs poured money into youth scouting and talent development, the idea that an elite goal scorer could simply slip through the cracks seemed almost impossible.

In fact, the youth soccer revolution may have helped Vardy flourish. Today, top Premier League prospects hone their skills in reserve sides limited to just three outfield players over the age of 21 in their lineups. So youngsters miss out on facing the grizzled brutes that populate the lower reaches of English soccer.

“Are they ready for the blood and thunder of the Premier League?” Pilley said. “When you’re playing the games that matter, you might get an elbow in the face.”

The first painful blow of Vardy’s career came when he was cut by Sheffield Wednesday around the age of 16 for being too small, he said. To carve out a career, he would have to start again at the bottom. That turned out to be around 5 miles and six divisions from Sheffield Wednesday at Stocksbridge Park.

Bigger clubs were soon sniffing around, Bethel said. But they saw warning signs, like a series of red cards and Vardy’s conviction for assault following a pub brawl. A court forced him to abide by a curfew and wear a monitoring tag on his ankle, even during games. On longer road trips, Stocksbridge would substitute him before full-time, stick him in a car and send him home to make curfew.

Still, Vardy’s talent was impossible to ignore. Fleetwood Town sent scouts to see him on six separate occasions. When they filed reports, the options were “Watch Again,” “Definite No,” or “Sign him.” All six came back unequivocal: “Sign him.”

“The concern was he’d only been scoring goals against part-time players,” said Pilley, who eventually signed him to a contract worth around $1,300 a week. “He’d been scoring against the electrician, the plumber, and the postman. The question was could he do it against full-time athletes?”

That question—can he cut it at the next level?—has followed Vardy everywhere. He signed for Halifax Town from Stocksbridge Park in 2010 and, a year later, bounced to Fleetwood. Halfway into his only season there, Fleetwood said it was already receiving offers of $1.6 million for him, four times the record for a non-league player. It wound up taking the cash from Leicester.

When Leicester was promoted to the Premier League at the end of the 2013-14 season, Vardy finally got his chance to prove he could cut it at the top level. “Jamie is an easy boy, He doesn’t think about the expectation,” Ranieri said. “I love him.”