You are here: Home / Blog / Liverpool are Premier League Champions… in Social Media

Liverpool fans have waited an excruciatingly long time to hear their team announced as Premier League Champions, but they can finally claim to be the Champions, in the social media realm at least.

In the 2015 Social Media table that has been released by Marketing Experts Tecmark, Liverpool reigns supreme over every other Premier League club. The table, which is based on the number of social interactions generated by content on their website spans from the start of the year to the end of 2015.

Liverpool’s social media dominance is unparalleled with one of the website’s leading pieces of content receiving more than the four bottom teams produced in 10 months combined.

Tecmark’s Search Director said that Premier League teams were in an enviable position when it came to their interaction with fans.

“What’s evident is that Premier League clubs needn’t be hugely creative with content to get the social interaction that other brands would dream of”, he said

“Articles and news amass a lot of traction simply because people care about these clubs. And it makes you wonder just what they could achieve on social media if they did start to get a bit more creative with content. The opportunity is huge and, as yet, we’ve not seen a Premier League club get anywhere near as creative with their content as other non-football brands.”

The one club that disappointed was West Ham who attracts considerable interest from fans in the UK and abroad. The club is ranked 18 on the Social Media table with just over 70,000 interactions since January 1 2015. 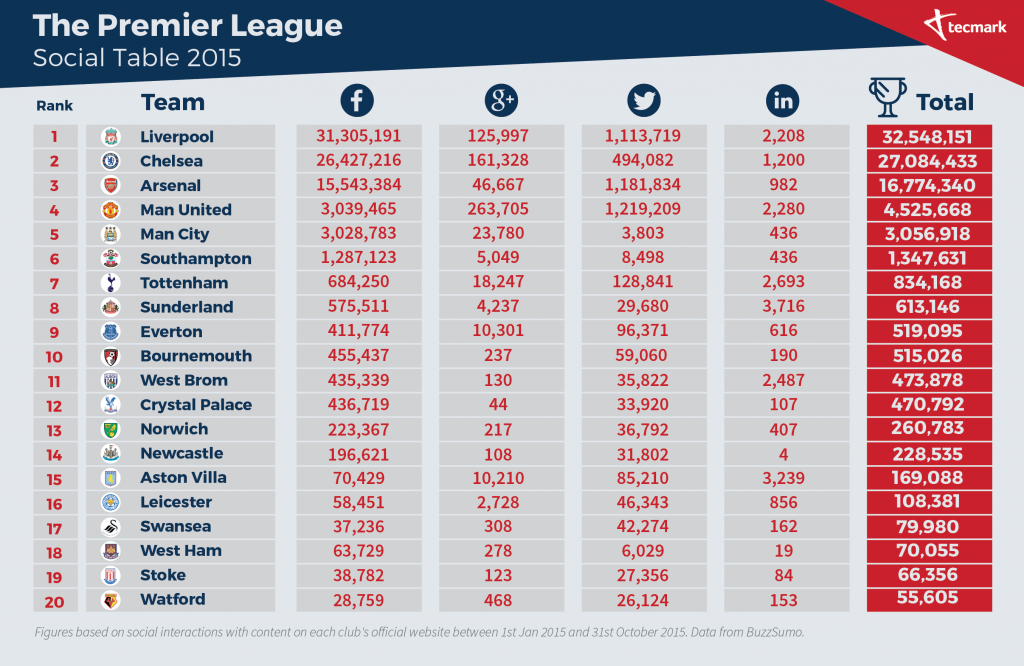 © 2015 Digital Sport | This article was written by Matt Tewhatu and first appeared on the Digital Sport Website on 11 November 2015.