Football’s top teams rely on rich sponsorships to pay for their massive player salaries, and few properties are more valuable than a team’s jerseys and stadium.

Team jerseys provide two revenue streams – deals with kit manufacturers that make the jerseys and sponsorship agreements with companies that advertise on them – while stadium naming rights provide an opportunity to leverage famed soccer grounds into even greater earnings.

In terms of jersey revenue, Manchester United is way out in front even without accounting for its new Adidas kit deal, which starts next season.

The Red Devils get an average $36 million per year on their old Nike deal, which expires at the end of this season, as well as a staggering $80 million from the new Chevy sponsorship deal. The seven-year, $560 million agreement is the sport’s single most valuable sponsorship (and may have been responsible for GM global marketing chief Joel Ewanick losing his job). And the team will break its own record next season when its new ten-year, $1.14 billion deal with Adidas kicks in.

Spain’s Barcelona, which ranks second, is 40% behind at $80 million per year from its kit and jersey deals with Nike, Qatar Sports Investments and Intel. Like many of the top-earning teams, neither Manchester United nor Barcelona has sold the naming rights to their stadium homes (Old Trafford and Camp Nou, respectively). But some teams have taken advantage of that sponsorship opportunity and, so far, the approach has paid off handsomely.

Bayern Munich sold its stadium naming rights to Allianz, which has since also become a minority team shareholder, on a lengthy 30-year deal. And both Arsenal and Manchester City have packaged stadium naming rights into their jersey sponsorships with Emirates and Etihad Airways, respectively. The latter agreement drew a fine from UEFA for violating financial fair play rules, but those deals are largely responsible for both English teams ranking among the top five teams in sponsorship income. 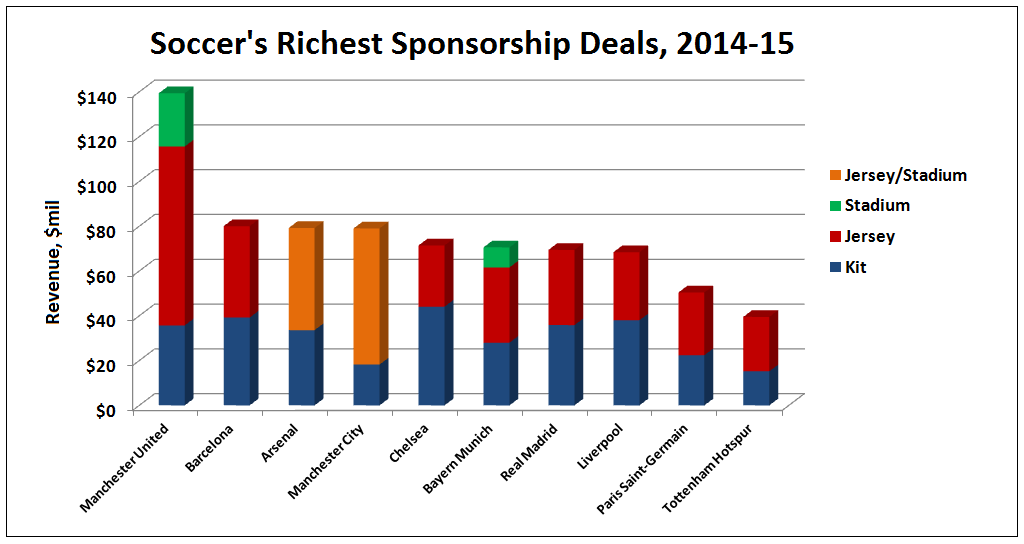 And it’s not like the market is slowing down. Below is an updated chart that accounts for new sponsorship deals that won’t kick in until at least next season. Juventus jumps into the top ten thanks to new deals with Adidas and Jeep, but the real story is at the top of the list, where Manchester United is making 52% more than any other team in the sport, even as Bayern Munich and Chelsea move ahead with new deals (an Adidas extension and new Yokohama Rubber sponsorship, respectively). 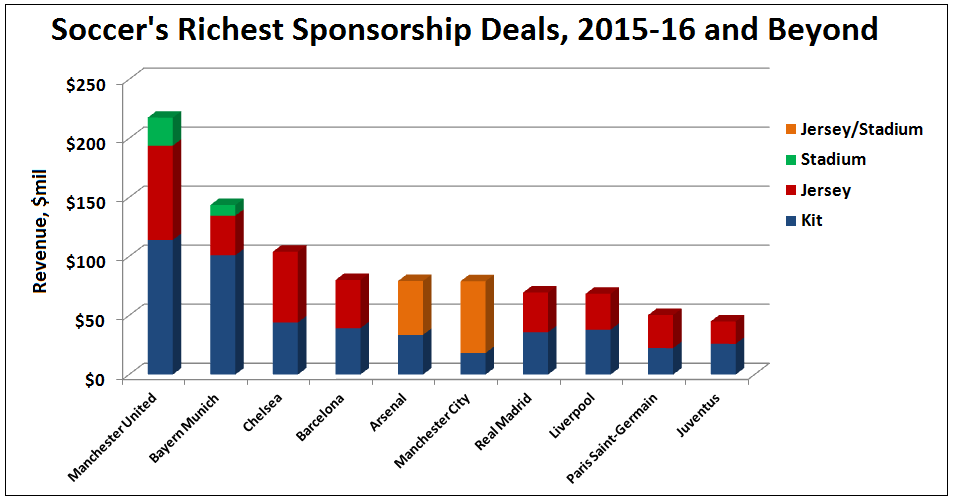 The biggest competition for Manchester United’s title, however, will likely be Barcelona. The Spanish side’s Nike kit and Qatar shirt deals should both be renegotiated in the immediate future, and it’s conceivable that their combined annual value could as much as double to $160 million per season. That won’t catch the Red Devils, who will soon net a staggering $218 million per year based on current exchange rates, but it should set the bar for the teams that don’t play in Old Trafford. Trying to clear that mark will be Manchester City, which is expected to begin renegotiating its Nike kit deal in the coming year.

There are five different kit manufacturers represented on our list – four Nike teams, three for Adidas and one apiece for Puma, Under Armour and New Balance’s Warrior brand – and eight jersey sponsors.The only sponsor with multiple teams on the list is Emirates, which has deals with Arsenal, Real Madrid and Paris Saint-Germain. Add in sponsored teams AC Milan and Hamburger SV, and the airline is currently shelling out $130 million per year to put its logo on soccer jerseys.

Just missing the cut this year are three Italian teams: Inter Milan, AC Milan and Juventus. As noted above, the last of the three will soon make a jump forward as Juve has signed a new deal with Adidas and an extension with Jeep that will generate some $45 million annually between the two.

« PreviousHow UEFA’s financial fair play rules are destroying football
Next »Eva Carneiro: Caught between their medical duty and a screaming manager … who’d be a football doctor?