You are here: Home / Blog / Two sides to the Dutch master, but only one winner

Two sides to the Dutch master, but only one winner

FC Barcelona star Gerard Pique tells a story about the time Louis van Gaal came over for dinner. It dates to The Netherlands coach’s first spell in charge of Barcelona.

Pique was barely in his teens then, just another promising player at the club’s academy, but he was of fine stock. His grandfather, Amador Bernabeu, was a director at the Nou Camp. He had the sort of pull that could get the coach round for tea.

“He was the Barcelona coach, for God’s sake, and I was 13 or 14,” Pique recalled. “I said to him that I’d like to be playing in the first team in three or four years. But he pushed me and I fell over. He just said: ‘He’s too weak to play for Barcelona’.”

It’s a fairly typical van Gaal anecdote, full of bombast and disdain and laced with a thread of boorishness. What is remarkable, though, is quite how many of the players that van Gaal faced with The Netherlands in Salvador on Saturday morning have such a story, quite how the lives of the 62-year-old and his opponents intertwine, quite how much all of Spain’s success in recent years is down to the man whose job it is now to put a stop to it, and quite a job he did on Saturday, winning an astonishing 5-1.

Van Gaal promoted both Xavi Hernandez and Andres Iniesta to Barcelona’s first team, as callow teenagers. He brought Victor Valdes — excluded from Spain’s squad only because of injury — into his senior squad. Van Gaal, in the words of the goalkeeper, “believed in a talent only he could see”. The Dutchman was photographed talking to an enthralled, toothy, baby-faced Jordi Alba at a dinner 15 years ago. 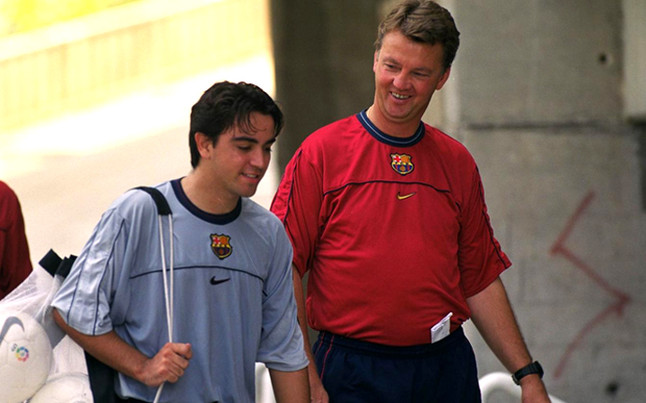 Louis van Gaal with Xavi during his time with FC Barcelona.

More than all of those snapshots, though, it was van Gaal who, more than anyone else, built the system that enabled all of them — as well as Cesc Fabregas, Pedro Rodriguez, Sergio Busquets and Pepe Reina — to thrive; who established the production line at La Masia that would turn Barcelona into the world’s pre-eminent club and transform Spain from perennial underachievers into arguably the finest international side in history; and who pioneered the devotion to the “tiki-taka” style of play that has made it all happen.

“We will win or die playing in the style we always have,” Xavi said yesterday. That is the style van Gaal gave them.

When the Dutchman was appointed at Barcelona in 1997, on the back of his extraordinary achievements at Ajax, he presented the club with a dossier. It remains a treasured document in Catalonia, even as he became persona non grata at the Nou Camp. In it he detailed how he wanted to overhaul the club’s youth system, how he felt the facilities needed to be improved, how he wanted to educate young prospects in Barcelona’s philosophy.

Josep Lluis Nunez, the club’s president, bought into it completely, to the extent that van Gaal was consulted on the refurbishment of the academy at La Masia.

“He wanted me to educate the kids, to be involved in youth development, to bring attacking, pressing football back,’ van Gaal is quoted as saying in Sid Lowe’s F ear and Loathing in La Liga.

“The team that played the most like Barcelona was Ajax. The influence was there: Johan Cruyff started it, I continued it, then Pep Guardiola perfected it.”

Van Gaal left Barcelona under a cloud — claiming that he had won more in six years at Ajax than the Catalan club had in a century — but even as his reign turned sour, it was clear that he felt he was leaving a genuine legacy. He was pilloried for claiming that his ultimate dream was to win the Champions League with a team entirely constructed at La Masia; in 2009, there were eight graduates on the pitch in Rome as Barcelona became kings of Europe.

He still refers to Xavi, Iniesta and the rest as “my” players; he did so again on Spanish radio this week. It is more than a decade since he coached any of them.

This is the other story that Pique, Xavi and the rest tell of van Gaal. They can overlook the bombast and the disdain. All they have for him is affection.

“He was always very frank with me,” Xavi said. “But I have an extraordinary memory of him. I owe him a lot.”

This is a Spain side educated by van Gaal — they expect him to follow his own lessons.